Dogs have been around for centuries. So, many different breeds come from all over the world. But there are certain countries that have developed more dog breeds than others. Where dog breeds come from depends greatly on what dogs were needed for at the time and what kind of climate they would be working in. In the case of England, we see many herding and hunting breeds of all sizes. Check out 27 English dog breeds below!

The Airedale is the largest of the terrier breeds. These dogs first appeared in the United Kingdom for otter hunting. In England, the breed was also used as a guard dog, police dog, and military dog. Today, the Airedale Terrier remains a versatile working breed, but can also be a cuddly companion. 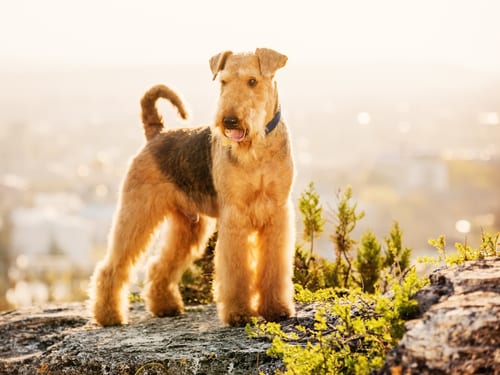 The Beagle is a scent hound used for hunting a variety of animals, including rabbits and small deer. The modern version of the breed dates back to the 1830s when they were widely used to hunt in packs. These dogs are beloved for their playful, happy-go-lucky personalities and their willingness to love all humans. 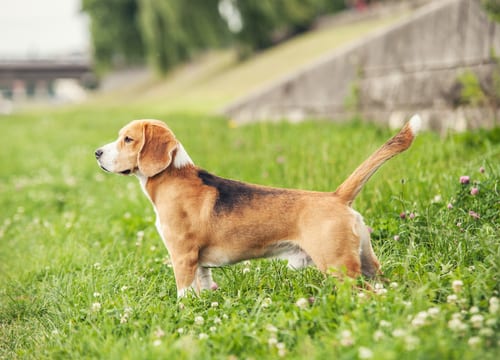 Bedlington Terriers are known for their lamb-like look. But believe it or not, these English dogs were originally bred to hunt vermin inside of mines. They have also been used in dog racing and other dog sports. Despite their work in mines, they’re powerful swimmers and make excellent water dogs. So, don’t be fooled by their beautiful, dainty appearance. 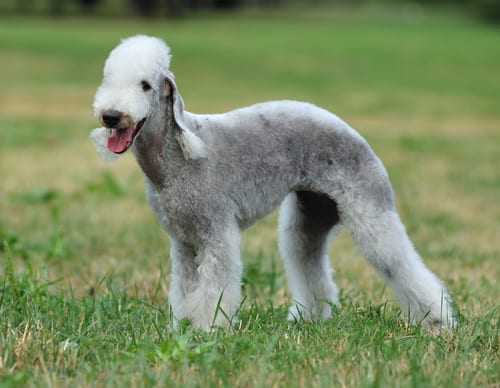 The Bloodhound is a large scent hound used for hunting large game such as deer and boar. They are also excellent tracking dogs and are used extensively in search and rescue teams as well as on police and military search groups. These floppy-eared canines are incredibly docile, but when they find a good scent, they won’t rest until they track it down. 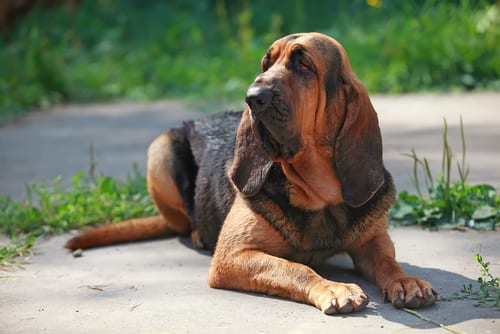 The Border Terrier is a small terrier that was used to hunt foxes and vermin. They are small but have long legs. Their structure gives them the ability to fit into rabbit dens but also keep up with the quick-moving Foxhounds. Luckily, they’re also happy and affectionate dogs in household environments. 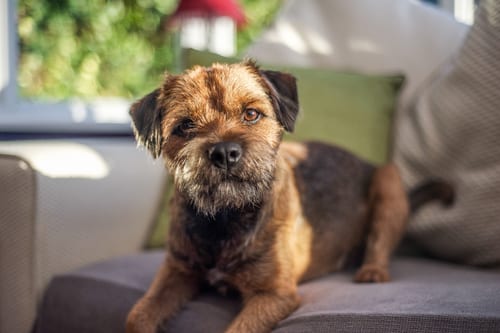 The Bull Terrier is quickly recognized by its egg-shaped head, although these dogs didn’t start out that way. This breed was developed in England by enthusiasts who wanted a dog that could hunt vermin and participate in the blood sports of that time. Crossing bulldogs with terriers gave them what they were looking for in the Bull Terrier. Now that dog fighting and bullbaiting have been outlawed, they make sweet tempered companions. 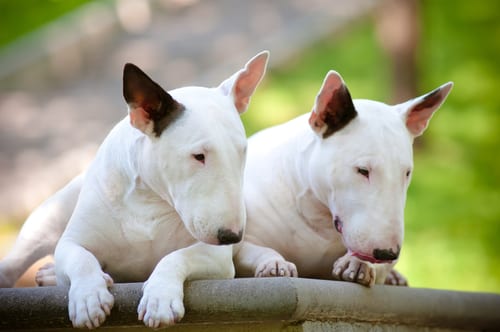 The Cavalier King Charles Spaniel has a history in England that dates back to the 18th century, when they were used for hunting. More recent history reports them being mostly lap dogs, which is obvious by their sweet, docile temperaments. In fact, this is one of the most gentle and affectionate English dog breeds, behaving well even around children. 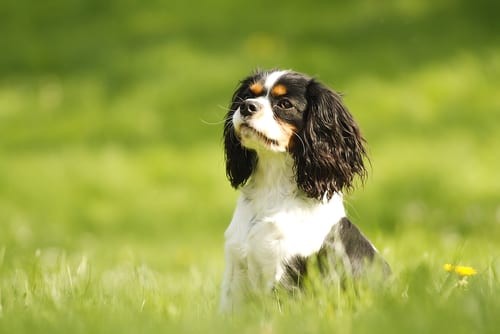 The Clumber Spaniel is the largest of the spaniels and was developed for hunting in dense areas. They are affectionate and deeply loyal dogs that are aloof with strangers. It wasn’t until the mid-19th century that the breed was seen outside of royalty. Despite a little shedding and drooling, these dogs are perfect gentlemen around their families. 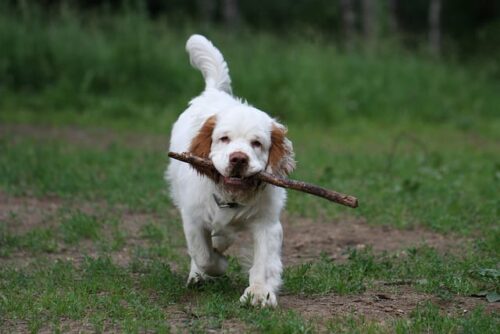 The English Bulldog has ancestors that date back to the 1500s. Although this more modern breed was bred and used for bull baiting, giving it its name. When bull baiting was outlawed, the breed outlived its purpose and became more of a companion than a working dog. Bulldogs are now lazy companions with adorable wrinkly faces. 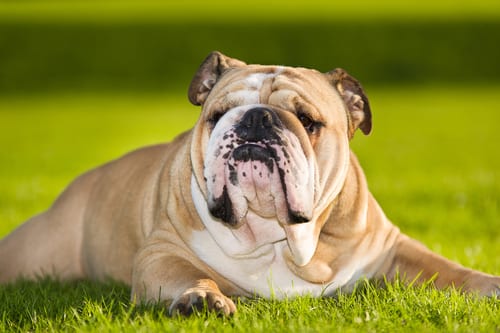 The English Cocker Spaniel is larger than its American cousin. This breed is a type of gun dog used to hunt mostly woodcock, from which it gets its name. Cocker Spaniels of all types date back to the mid-1800s. They’re often described as happy, playful dogs who enjoy being around their loved ones. 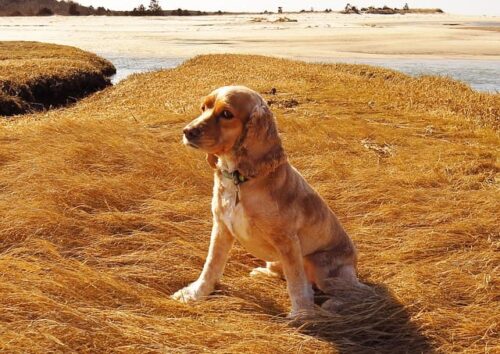 The English Foxhound was a dog breed developed in the 16th century. They were used to hunt foxes in packs, with their hunters following along on horseback. In fact, packs of hunting Foxhounds can still be found today by hunting and breed enthusiasts alike. Of course, they can also make social, active companions too. 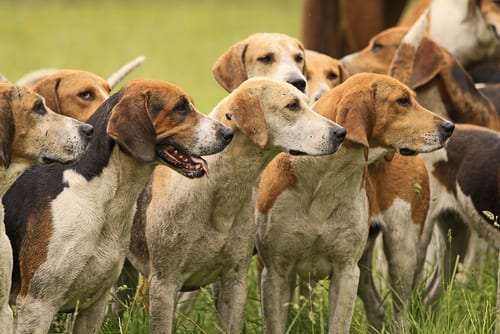 The English Mastiff has ancestors that were bred for guarding back in the 1400s. They were used as war dogs, property and livestock guardians, and for bull baiting. Although the uses and the breed itself have changed over time, the history remains the same. These giant dogs might look intimidating, but they’re usually just big teddy bears.

The English Springer Spaniel is a gun dog breed used for flushing and retrieving game. This spaniel-type breed has been doing its job since the 1800s. The first field trials for English Springer Spaniels were held in 1899, with the first field champion titled in 1914. These dogs are incredibly obedient, which is why they worked so well for those roles. 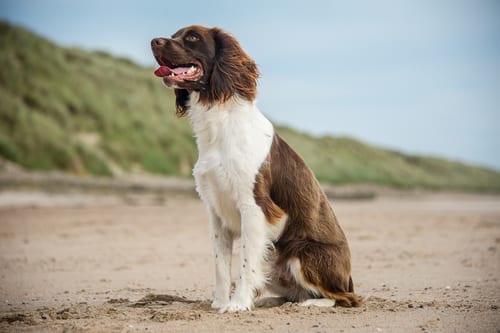 The Flat-Coated Retriever is used to hunt and retrieve game on both land and in water. They were developed in the 19th century in England, with the final breed type being established in 1880. Like most retrievers, they’re cheerful, playful, and love to spend time with family. 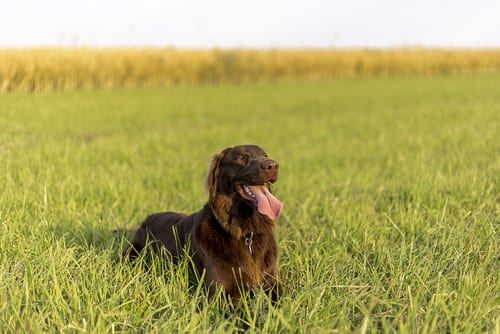 The Jack Russell Terrier was originally developed for fox hunting. Reverend John Russell is considered to be the first breeder, creating dogs that had enough drive to hunt and chase foxes but not enough aggression to damage the quarry. Today, Jack Russells are popular companion dogs, but they can be a handful due to their high energy. 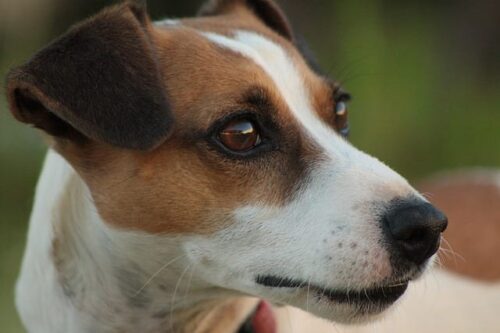 The Lakeland Terrier is aptly named after its home in the Lake District in England. It is a relatively rare breed not usually seen outside of England. These dogs were used to kill foxes that ran into their dens while being hunted. They have the personality of a large dog in a small body since they usually weigh 17 pounds or less. 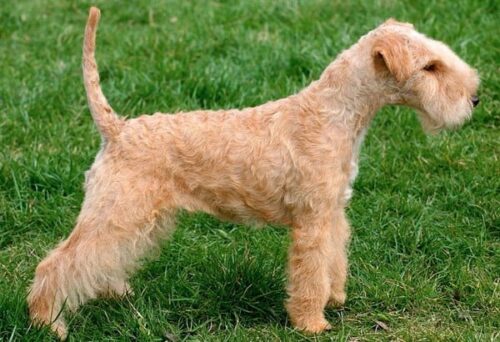 The Manchester Terrier was used as a ratting dog in England in the early 19th century. They were most needed when the country experienced very poor sanitation and an abundance of rats and other vermin. Although a relatively small breed, these dogs were able to effectively eliminate vermin twice their size. To this day, they still remain very spirited and determined. 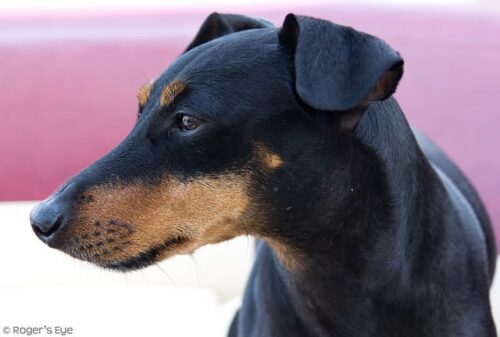 The Norfolk Terrier was considered a drop-eared version of the Norwich Terrier until the 1960s, so their history is fairly similar. They were bred and used as ratting dogs in the cities. These little dogs are happy to curl up on your lap, but they also crave lots of adventure. 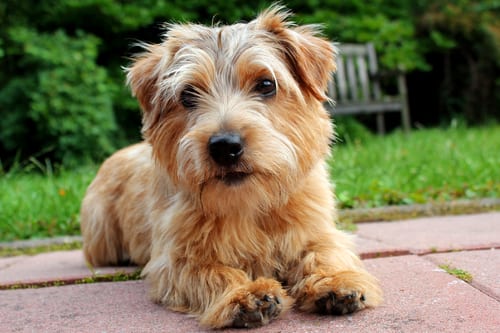 Norwich Terriers were developed in England as ratting dogs as well as fox hunting dogs, but gained particular popularity in more urban areas due to their small size. From them comes the Norfolk Terrier, which was considered the same breed until the 1960s. 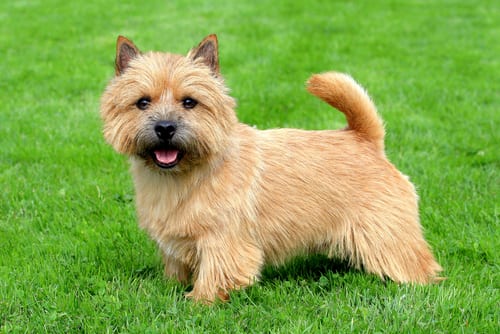 The Patterdale Terrier was developed by a former Border Terrier breeder looking for a tougher dog that could handle a larger variety of quarry. They were originally used to hunt foxes by catching, fighting, and killing them. But when this became illegal in 2004 the breed has been used on other game and even various dog sports. 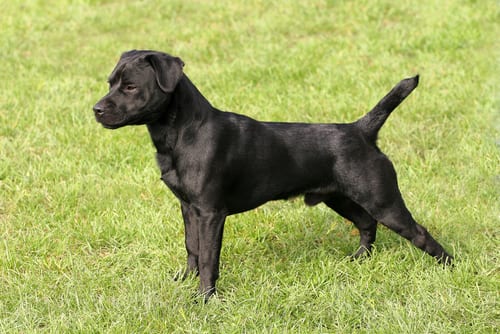 The Pointer, sometimes called the English Pointer, is a popular gun dog breed used for hunting a variety of game. Pointers show up in England’s history as far back as 1650. The dog is often considered the “bird dog,” even in other countries. After all, they’re so useful at hunting fowl it’s somewhat unlikely to find hunters using other breeds. 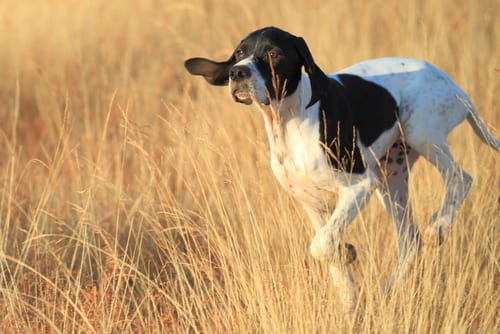 The exact origin of the Smooth Fox Terrier is unknown, but history shows they have been used to hunt in England since the 18th century. Their original job was fox bolting, which means they were to follow foxhounds on a hunt and chase after foxes that bolted into their dens and other hiding places. They are generally independent and well-behaved in a home setting too. 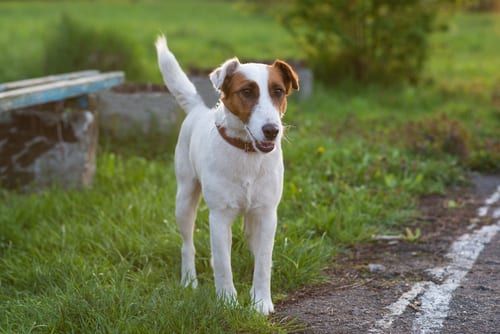 The Staffordshire Bull Terrier was developed in England specifically for the purposes of bull baiting and bear baiting until these activities became illegal in 1835. After that, the breed was used for dog fighting and then bred to be an active pet companion when this was outlawed as well. As one of the common “Pit Bull breeds,” these dogs are full of love despite the harmful stereotypes. 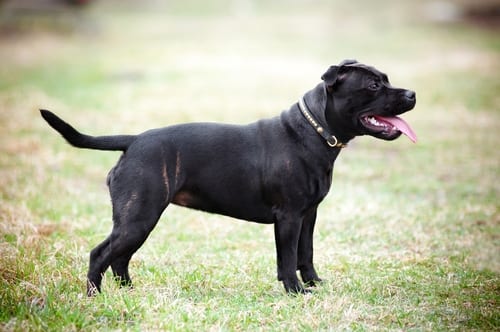 The first Sussex Spaniel was bred in 1795 and was created to be a smaller, sturdier spaniel for hunting. Hunters needed a dog for specific areas that were dense and rough, making typical spaniel dogs unable to cover them effectively. They have shorter legs than other spaniels, but are just as friendly and cheerful. 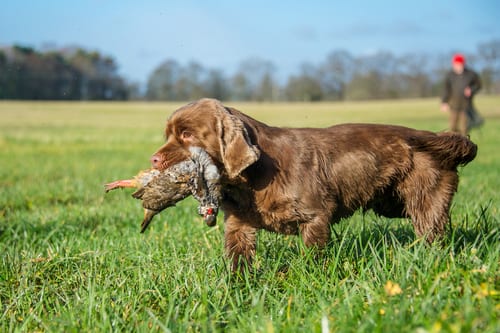 The Whippet is a sighthound originally bred in England to hunt rabbits and rats. Because of their Greyhound ancestry, they were also used in sports like coursing and dog racing before it became illegal. In fact, Whippets are currently the fastest accelerating dog in the world. So, they’re sure to keep you on your toes! 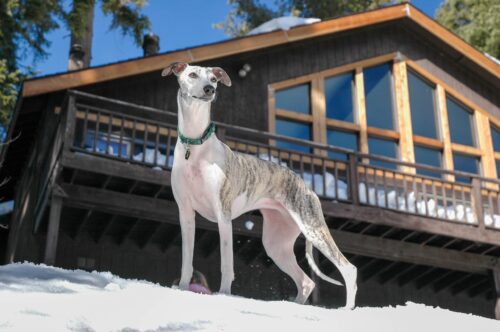 Like their smooth-coated cousin, Wire Fox Terriers were developed in England to hunt foxes. It’s thought that their strong tails made it possible for hunters to pull their dogs out of dens once they caught the foxes inside. Because of their working history, they’re always confident and alert. 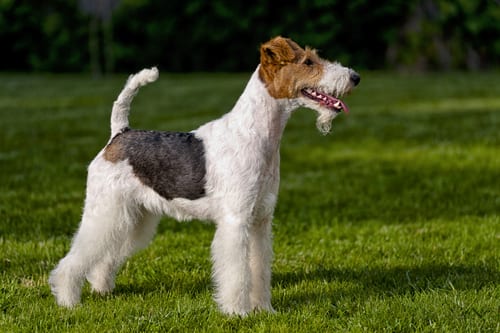 Although these dogs are now mostly seen inside of purses and on laps, the Yorkshire Terrier was developed in England as a rat hunter. They were used to catch rats in clothing mills in the 19th century and were considered very good at their jobs. But now, most people know Yorkies as playful and lovable lap dogs. 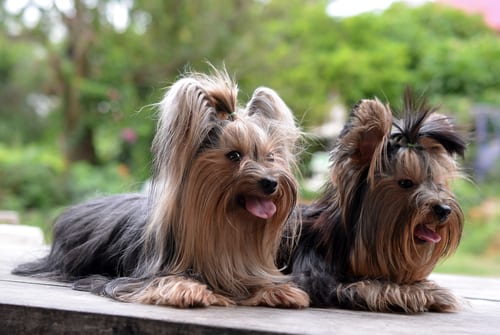 There’s no shortage of English dog breeds. And each dog stands out in their own unique way, from daring hunting dogs to fluffy lap dogs. So, no matter what your canine preference is, it’s likely that there’s a dog from England that suits you. Maybe this list even helped you learn a little more about your own dog’s history!