Basketball Stars is a game that will change everything you know about basketball. Actually, that’s a bit of an exaggeration, but Miniclip’s simple but fun hoops game will cut out most of what’s extraneous about hoops and let you concentrate on things you could do easily in real life with just a ball, a hoop and maybe a friend.

Whether playing a shooting competition or a game of one-on-one where you have to learn to play some defense too, the skills you’ll need are pretty basic. Yet within a narrow framework, there are some important things to master before you can take on the world.

Some of them are best learned the same way you’d improve in real basketball, by simply doing them repeatedly until you get better. But we can also give you a hand by pointing out where to start. Follow along with our Basketball Stars Tips, Cheats and Strategies and you’ll be that much closer to winning any (virtual) playground challenge you throw down. 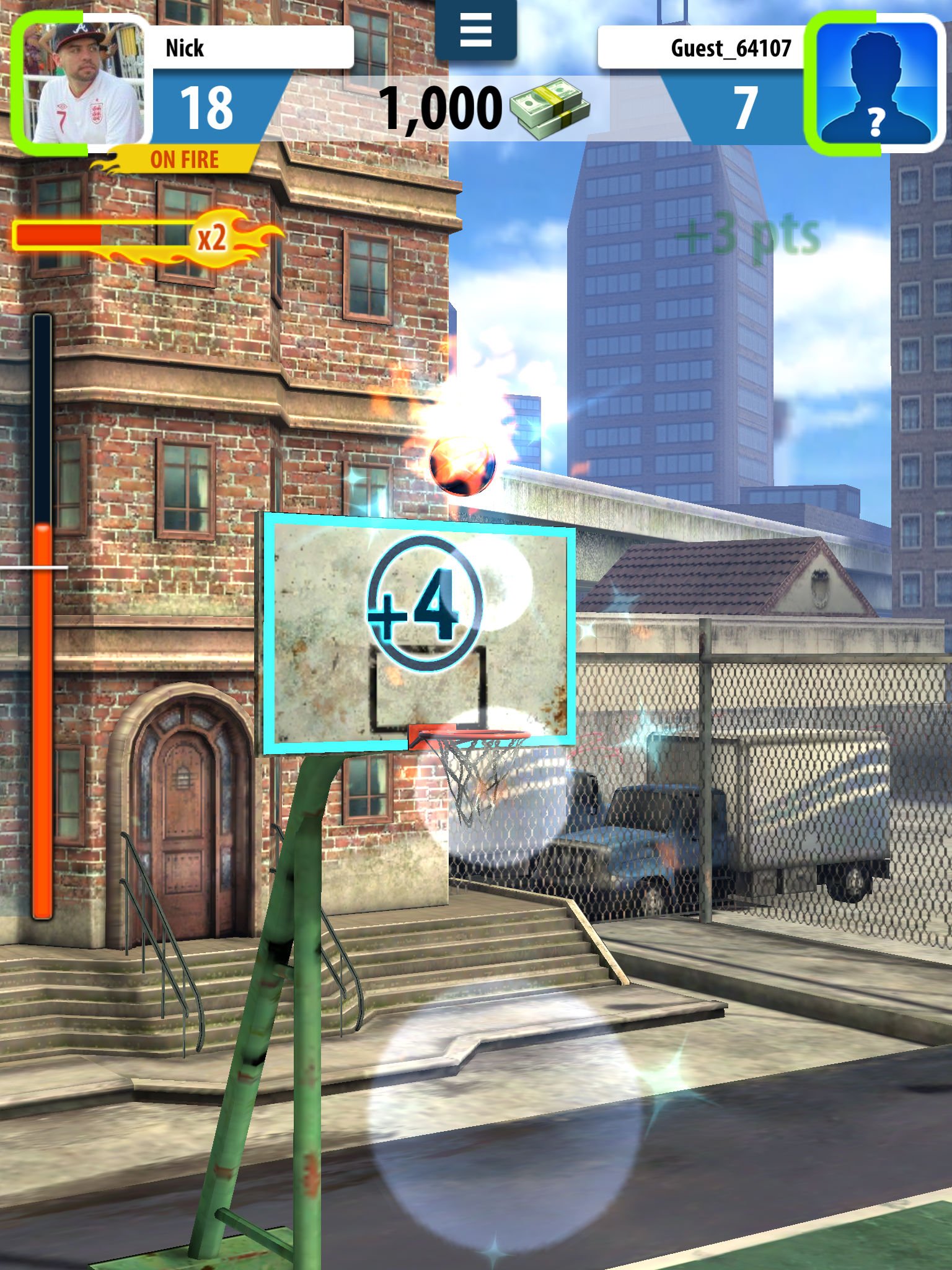 If you don’t learn how to shoot a basketball, you aren’t going to be very good at Basketball Stars. That’s just the way it goes. Fortunately, while muscle memory is involved, just like it is in real life, a lot less actual muscle is needed to get the ball in the hoop.

In either game mode, the key to shooting is swiping straight and the correct distance for how far away you are from the basket. You’ll be able to tell by the in-game graphics, but mostly from the meter that sits on the left-hand side of the screen. A line on that meter will tell you approximately how far you’ll have to swipe; too little will leave the shot short, while too hard will clatter it off the back of the rim or the backboard.

Shooting Race, the first game mode you’ll encounter, will see shots grow gradually longer as the time ticks down, so the key is to watch carefully for when the meter changes and be ready to swipe a little further. The speed of your swipe doesn’t matter, but you still want to get proficient at shooting quickly so you can launch the next shot as soon as possible. And if you get a swipe exactly right, you’ll get bonus points, so getting it right to to the line is something you’ll want to master.

A World of Bonuses 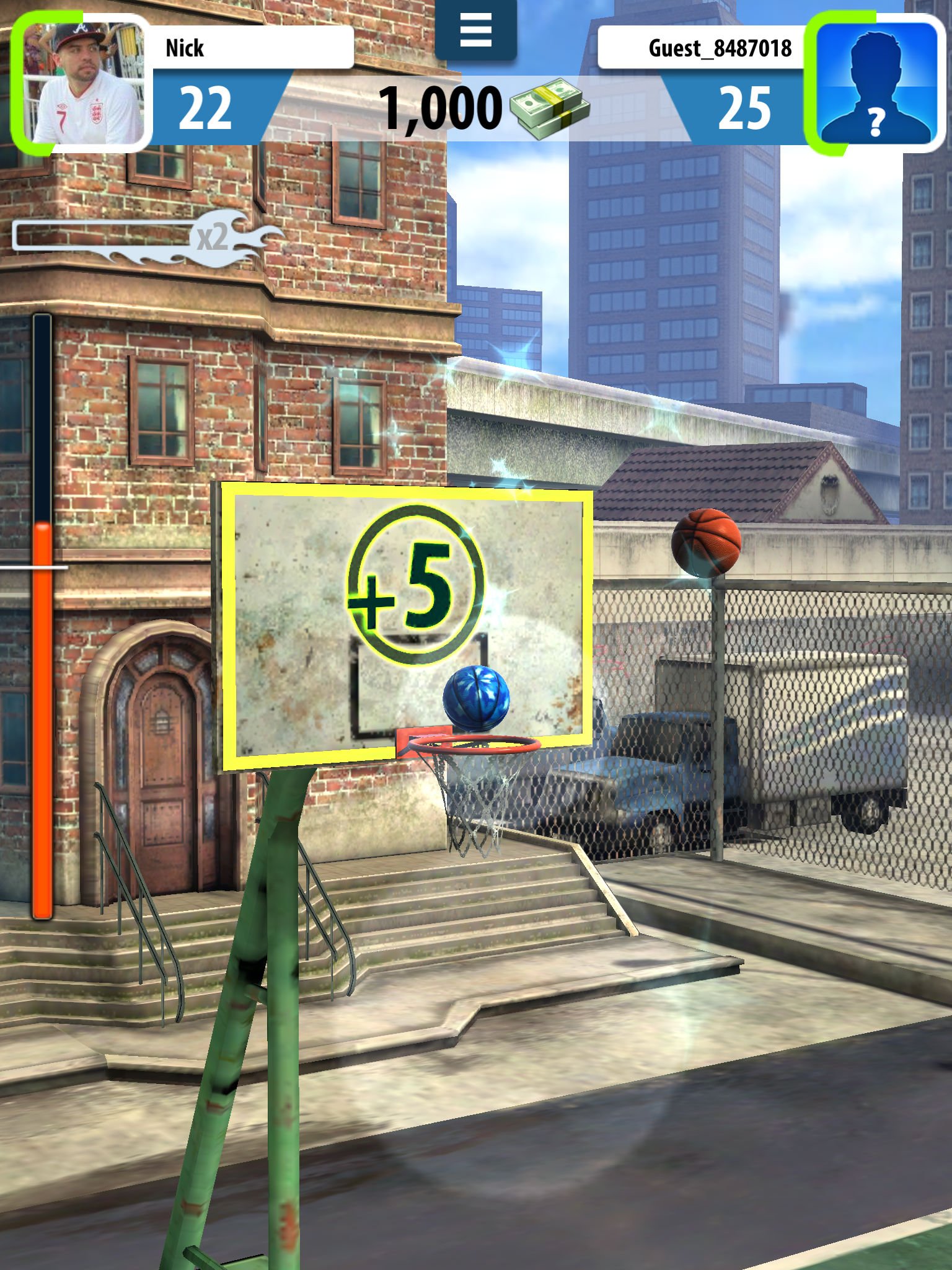 Shooting Race would be frantic enough if it was just you and your opponent slinging basketballs as quickly as possible, but the addition of some bonuses allows you to get a leg up on your foe — or vice versa, of course — even if you aren’t quite as fast on the release. Here’s what to watch for as you shoot: 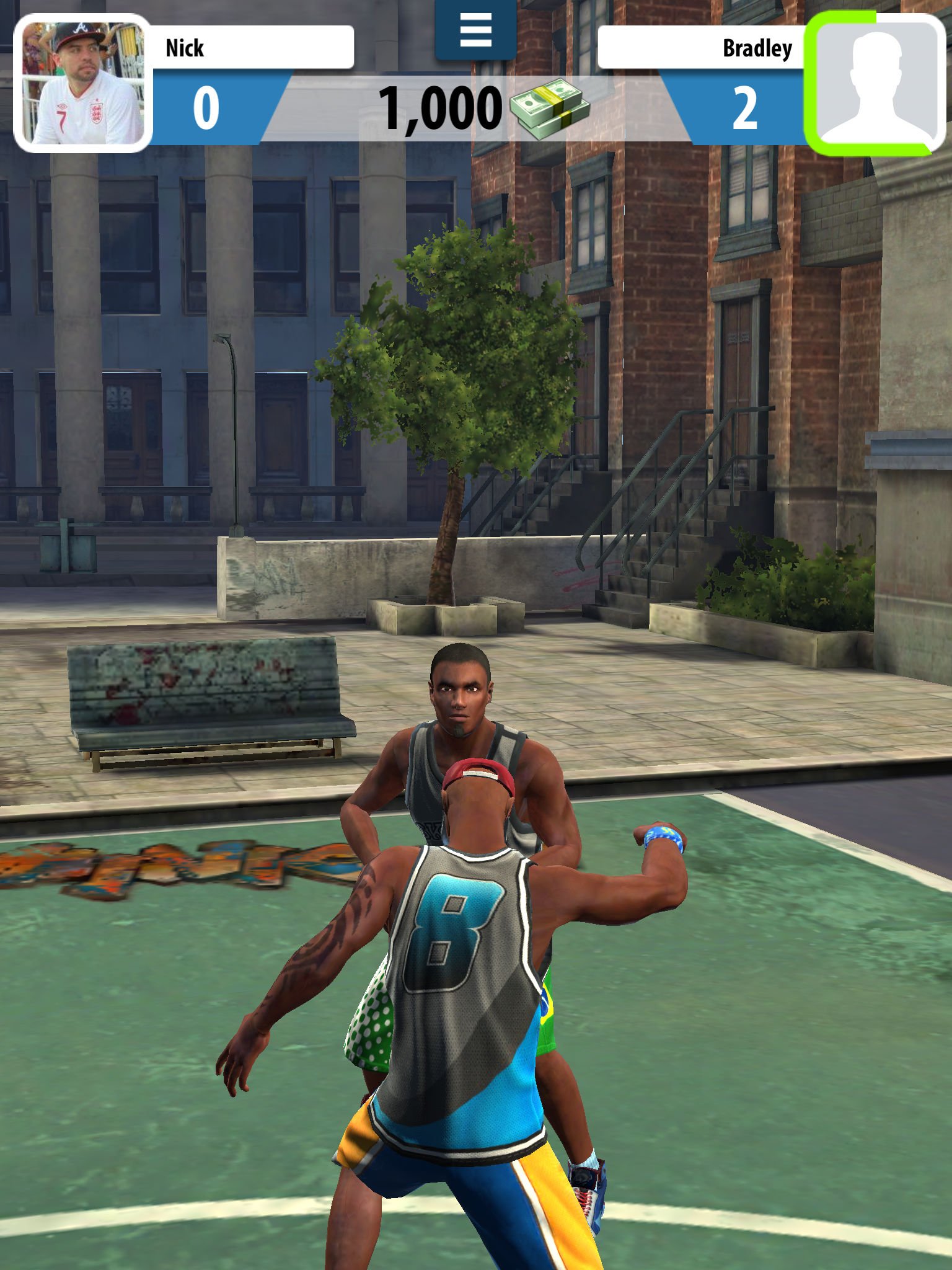 Have shooting down pat? Excellent! You’ll need some additional tricks to become proficient in Attacker-Defender, which is what Basketball Stars calls one-on-one. In this mode, you’ll still have to be able to shoot, but with the complication of a live opponent playing defense. Take too long to shoot and you’ll have the ball stolen from you; launch a shot too obviously and the defender will jump and block it.

On offense, you can free yourself to shoot by moving — at least a little. Swiping in either direction will move you one step to the left or right and possibly give you a clean look. You can also tap to fake in that direction, which might draw the defender that way and let you stay in the center to shoot. The idea is to take a shot as soon as the defender is in another lane, because he won’t be able to block your shot. But you’ll also want to be in near constant motion until you are ready to shoot to avoid the possibility of a steal.

Conversely, the key to ‘D’ is not going for too many fakes. You won’t quite be quick enough to jump to block a shot going up after getting faked out, so it’s part reflexes, part guessing game. If you think your opponent is shooting, be ready to swipe up for a block, because you’ll always get the ball if you are right and your timing is good.

The final thing to remember is that Attacker-Defender is “make it, take it,” meaning whoever scores remains on offense. Games are to 10 points to start but the score needed to win increases as you advance to higher levels of competition. 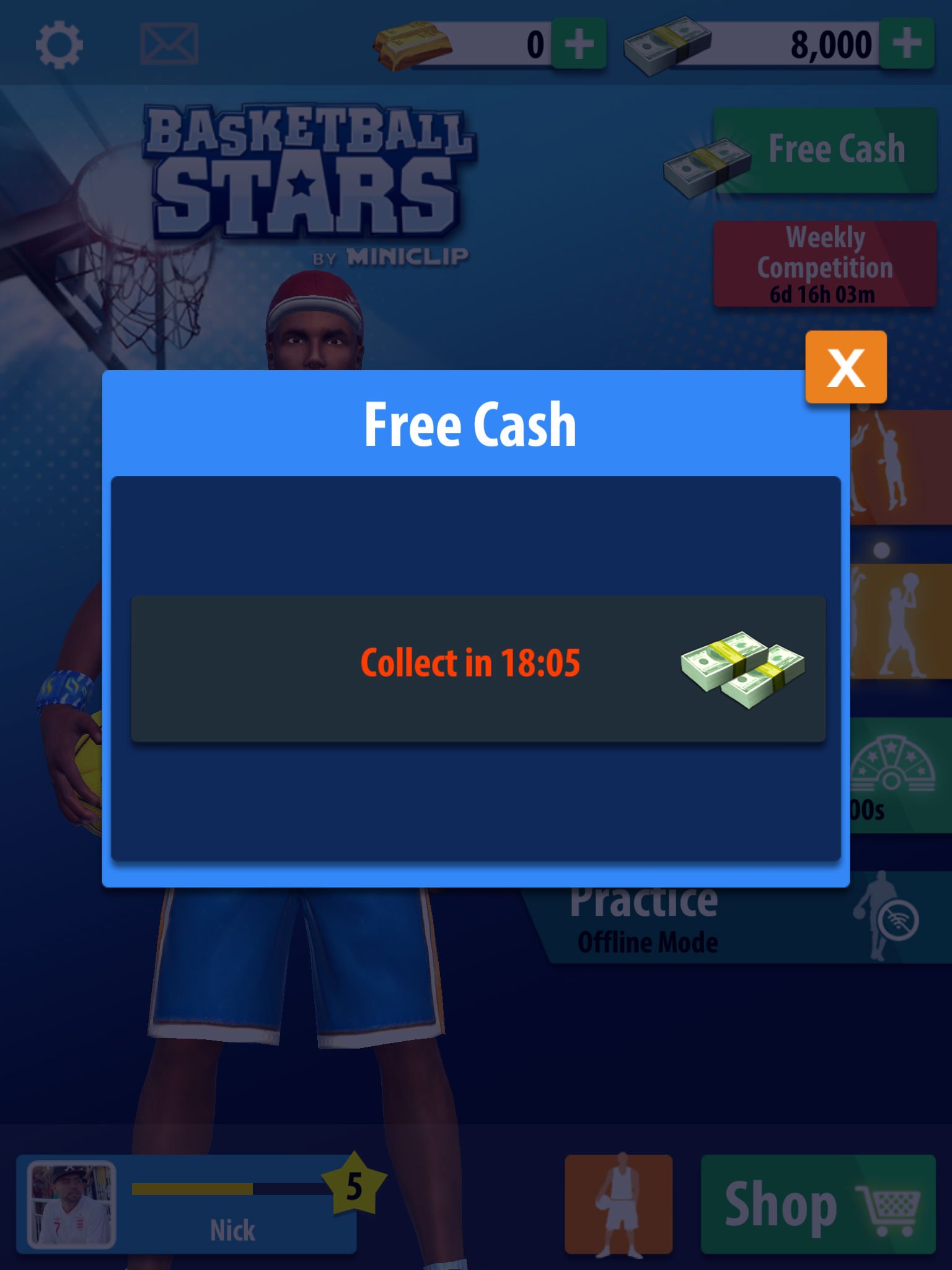 Every game played in either mode of Basketball Stars requires you to stake half of the cash won. It’s like you were betting on a game of one-on-one at the playground, except with fake money and no chance of getting mugged or hustled.

Alas, this means that if and when you hit a losing streak, you can run out of cash pretty quickly. How do you get more? There are a couple of ways:

Be aware that the amount of cash you’ll need to put up just to play goes up as you unlock the higher level courts in either mode, but so does the amount you win.

Ball Out With Better Balls 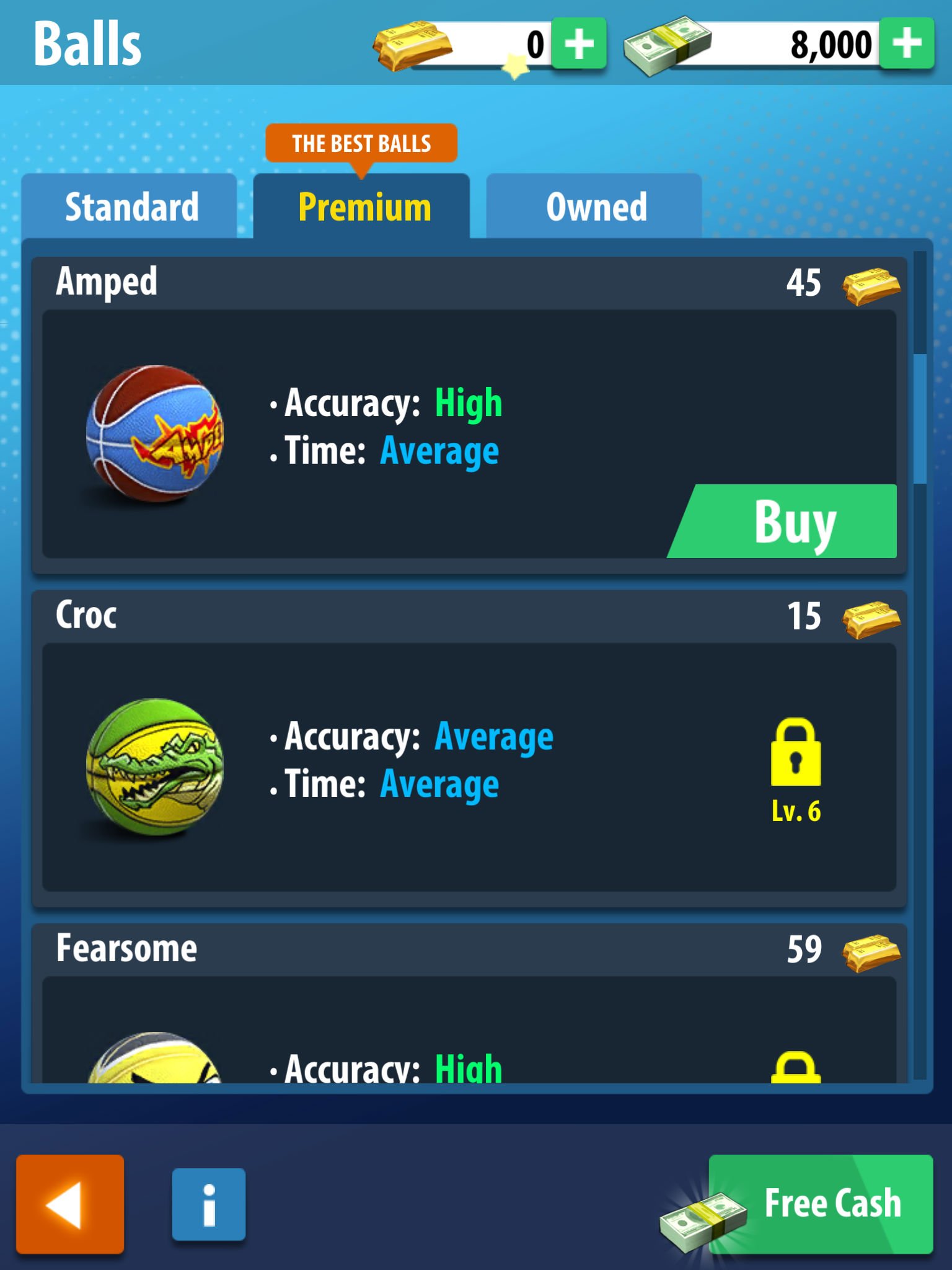 Most of the ways you can customize your player in Basketball Stars are cosmetic, but don’t sleep on getting a new basketball. Tapping on the “Balls” icon within the customization screen will show you a variety of both standard and premium basketballs that you can either buy with cash or gold or win in an equipment bag.

Certain balls will either increase accuracy, allowing more forgiveness when you don’t gauge your swipe exactly right, or time, meaning you’ll be able to shoot your next shot faster. If you can acquire a ball that has bonuses in both areas, it’ll make your hoops life that much easier.