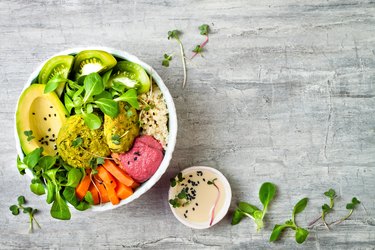 When it comes to planning a diet, one big decision revolves around carbs. It's not just about choosing the number of carbs to eat. The key is targeting carbs that won't boost your blood sugar. Quinoa is one carb you can use to fill your daily quota. It's good for your health because it's a whole grain, and its low glycemic index means it won't spike your blood sugar.

Quinoa and the Glycemic Index

The glycemic index, or GI, is a rating system that shows the impact of carbohydrate-containing foods on blood sugar compared to pure glucose. Glucose, which significantly spikes blood sugar, has a GI score of 100. Using a scale of zero to 100, GI scores are separated into three groups — low, moderate, and high. Any food with a score of 55 or less falls in the low-glycemic range, 56 to 69 puts it in the moderate-glycemic category, and 70 or above represents a high-glycemic item.

Quinoa has a glycemic index score of 53, based on a 150-gram serving, or a little less than 1 cup of cooked quinoa. This serving size contains 32 grams of total carbohydrates, including 1 gram of sugar. Most of these carbs come from complex carbohydrates, like starch. These digest slowly, enter your bloodstream gradually and don't cause harmful blood sugar spikes.

One cup of quinoa contains 5 grams of fiber, which represents 20 percent of women's recommended intake of 25 grams daily and 13 percent of the 38 grams of fiber men should consume. The soluble fiber in quinoa helps lower cholesterol and promotes the growth of healthy bacteria in your gut, while its insoluble fiber prevents constipation.

Dietary fiber also contributes to quinoa's low-glycemic impact. Fiber slows down the movement of food as it passes through your stomach and intestine, which in turn slows sugar absorption. This means you get longer-lasting energy, and blood glucose stays stable because sugar is absorbed at a slow, steady pace.

Quinoa's glycemic index score comes close to the moderate range beginning at a GI of 56, which means a few variables could raise its GI score out of the low range. A specific serving size is used when foods are tested for their glycemic impact. If you eat more than 1 cup of cooked quinoa at one sitting, the extra carbs will have a bigger effect on blood sugar.

You can mix plenty of veggies in with your quinoa, but adding a bunch of high-glycemic ingredients will push it into the moderate GI range. Even though it's often served as a savory dish, some people prefer to sweeten their quinoa much like oatmeal. If that's your choice, use natural fruits or choose alternative sweeteners. For example, calorie-free sugar substitutes such as stevia, aspartame, saccharin and sucralose don't affect blood sugar. Xylitol, sorbitol and other sugar alcohols have very low GI scores, and agave nectar is slightly higher yet still in the low range with a GI of 27.

Using Quinoa in a Low-Glycemic Diet

Following a low-glycemic diet doesn't just cut your risk of diabetes — it also lowers the chance of developing heart disease and can help you keep weight off. It's not hard to do when you start with quinoa and round out the meal with nutrient-rich, low-glycemic foods. Most veggies — think of all the green, yellow, red and orange colors — are very low-glycemic choices. And proteins such as chicken are free of carbs, so they don't affect blood sugar. Create a one-dish meal by putting quinoa in a bowl, adding a favorite veggie and cut-up chicken, then topping it with olive oil and fresh lemon juice.

Quinoa makes a healthy, low-glycemic salad because its mild flavor blends well with almost any ingredient you might want to use. Keep it as simple as quinoa, sunflower seeds, black olives, fresh parsley and lemon juice. Or create a more elaborate mix of quinoa, spinach, mushrooms, peas, avocado and tahini dressing.